Sam Roloff Portland Oregon artist was featured in the May 2011 issue of “Forest Heights Life“ magazine. 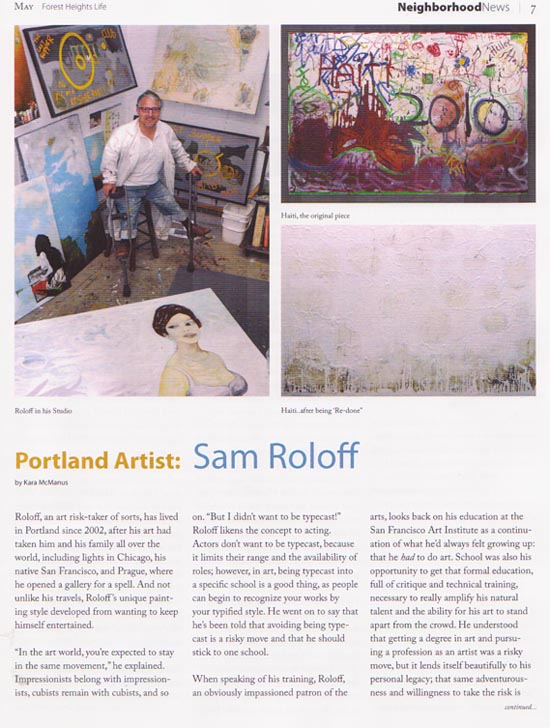 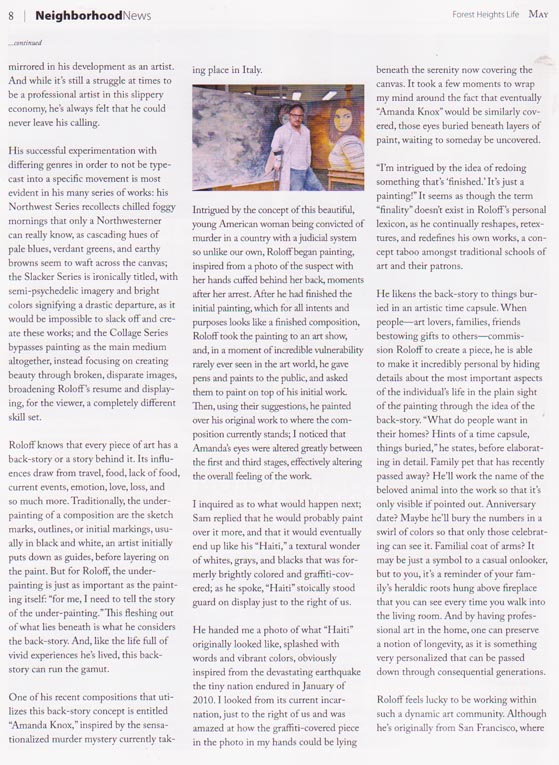 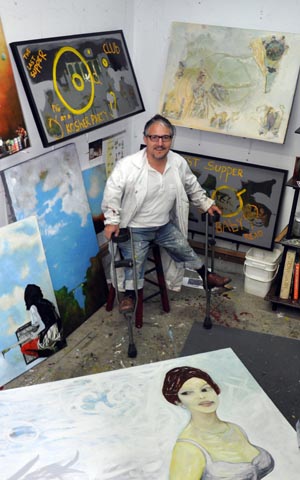 When I asked local artist Sam Roloff to explain his “back-story” approach to painting, as the sounds of the live band starting up in the next room floated into the entrance hall where we sat during the Forest Heights Life launch party, I was forced to lean in to hear his response: as a giant smile broke across his face, he said, “I love talking about the back-story.”

Roloff, an art risk-taker of sorts, has lived in Portland since 2002, after his art had taken him and his family all over the world, including lights in Chicago, his native San Francisco, and Prague, where he opened a gallery for a spell.

And not unlike his travels, Roloff’s unique painting style developed from wanting to keep himself entertained.

“In the art world, you’re expected to stay in the same movement,” he explained. Impressionists belong with Impressionists, Cubists remain with Cubists, and so on. “But I didn’t want to be typecast!” Roloff likens the concept to acting. Actors don’t want to be typecast, because it limits their range and the availability of roles; however, in art, being typecast into a specific school is a good thing, as people can begin to recognize your works by your typified style. He went on to say that he’s been told that avoiding being typecast a risky move and that he should stick to one school. “But I can’t! I can do a lot [when it comes to my art], and I don’t want to be stifled.”

When speaking of his training, Roloff, an obviously impassioned patron of the arts, looks back on his education at the San Francisco Art Institute as a continuation of what he’d always felt growing up: that he had to do art. School was also his opportunity to get that formal education, full of critique and technical training, necessary to really amplify his natural talent and the ability for his art to stand apart from the crowd.

He understood that getting a degree in art and pursuing a profession as an artist was a risky move, but it lends itself beautifully to his personal legacy; that same adventurousness and willingness to take the risk is mirrored in his development as an artist. And while it’s still a struggle at times to be a professional artist in this slippery economy, he’s always felt that he could never leave his calling.

His successful experimentation with differing genres in order to not be typecast into a specific movement is most evident in his many series of works: his Northwest Series recollects chilled foggy mornings that only a Northwesterner can really know, as cascading hues of pale blues, verdant greens, and earthy browns seem to waft across the canvas; the Slacker Series is ironically titled, with semi-psychedelic imagery and bright colors signifying a drastic departure, as it would be impossible to slack off and create these works; and the Collage Series bypasses painting as the main medium altogether, instead focusing on creating beauty through broken, disparate images, broadening Roloff’s resume and displaying, for the viewer, a completely different skill set.

And the Collage Series is where the “back-story” can really be illustrated. 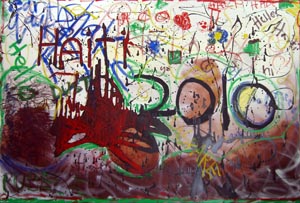 Roloff knows that every piece of art has a back-story, or a story behind it. Its influences draw from travel, food, lack of food, current events, emotion, love, loss, and so much more. Traditionally, the under-painting of a composition are the sketch marks, outlines, or initial markings, usually in black and white, an artist initially puts down as guides, before layering on the paint. But for Roloff, the under-painting is just as important as the painting itself: “for me, I need to tell the story of the under-painting.” This fleshing out of what lies beneath is what he considers the back-story. And, like the life full of vivid experiences he’s lived, this back-story can run the gamut.

One of his recent compositions that utilizes this back-story concept is entitled “Amanda Knox,” inspired by the sensationaliz 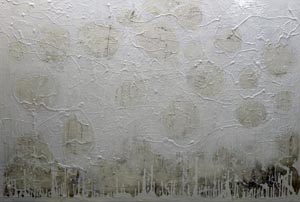 ed murder mystery currently taking place in Italy. Intrigued by the concept of this beautiful, young American woman being convicted of murder in a country with a judicial system so unlike our own, Roloff began painting, inspired from a photo of the suspect with her hands cuffed behind her back, moments after her arrest. After he had finished the initial painting, which for all intents and purposes looks like a finished composition, Roloff took the painting to an art show, and, in a moment of incredible vulnerability rarely ever seen in the art world, he gave pens and paints to the public, and asked them to paint on top of his initial work. Then, using their suggestions, he painted over his original work to where the composition currently stands; I noticed that Amanda’s eyes were altered greatly between the first and third stages, effectively altering the overall feeling of the work.

I inquired as to what would happen next; Sam replied that he would probably paint over it more, and that it would eventually end up like his “Haiti,” a textural wonder of whites, grays, and blacks that was formerly brightly colored and graffiti-covered; as he spoke, “Haiti” stoically stood guard on display just to the right of us.

He handed me a photo of what “Haiti” originally looked like, splashed with words and vibrant colors, obviously inspired from the devastating earthquake the tiny nation endured in January of 2010. I looked from its current incarnation, just to the right of us and was amazed at how the graffiti-covered piece in the photo in my hands could be lying beneath the serenity now covering the canvas. It took a few moments to wrap my mind around the fact that eventually “Amanda Knox” would be similarly covered, those eyes buried beneath layers of paint, waiting to someday be uncovered.

“I’m intrigued by the idea of redoing something that’s ‘finished.’ It’s just a painting!” It seems as though the term “finality” doesn’t exist in Roloff’s personal lexicon, as he continually reshapes, retextures, and redefines his own works, a concept taboo amongst traditional schools of art and their patrons. 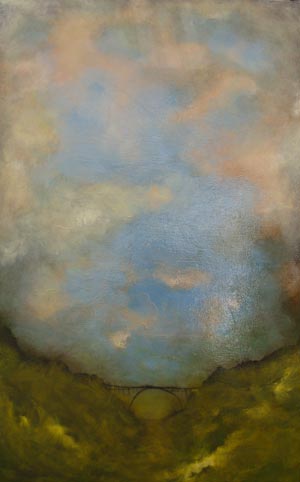 He likens the back-story to things buried in an artistic time capsule. When people – art lovers, families, friends bestowing gifts to others – commission Roloff to create a piece, he is able to make it incredibly personal by hiding details about the most important aspects of the individual’s life in the plain sight of the painting through the idea of the back-story. “What do people want in their homes? Hints of a time capsule, things buried,” he states, before elaborating in detail. Family pet that has recently passed away? He’ll work the name of the beloved animal into the work so that it’s only visible if pointed out. Anniversary date? Maybe he’ll bury the numbers in a swirl of colors so that only those celebrating can see it. Familial coat of arms? It may be just a symbol to a casual onlooker, but to you, it’s a reminder of your family’s heraldic roots hung above fireplace that you can see every time you walk into the living room. And by having professional art in the home, one can preserve a notion of longevity, as it is something very personalized that can be passed down through consequential generations.

Roloff feels lucky to be working within such a dynamic art community. Although he’s originally from San Francisco, where his formal art education took place, he believes that “Portland is the most dynamic [art] community going on right now,” definitely in the United States, but maybe in the entire world. From the First and Last Thursdays, to the art walks, to the ability for artists to display their works in local businesses, he says that the artists aren’t in competition with one another here, which is something he’s rarely ever seen before. Instead of competing with one another, “artists are helping each other out.” In twenty, thirty, forty years, Roloff believes people will remember Portland for what it is at this time, not unlike Seattle was for the music industry in the early 1990s. “Portland is that place,” Roloff states, looking again toward “Haiti,” still stoically standing guard next to us on display. “I’d tell people to buy this art now, when it’s inexpensive, when it’s in the moment,” because this “moment” can never be recreated; Portland’s art is a piece of living history.

And falling in line with his concepts of the back-story, the time capsule, and things buried, this risk-taking artist continues to create beautiful compositions that seem to defy the unwritten laws of art.

Sam Roloff can be reached for commissioned paintings at (503) 975 5256; his website, www.66.147.244.107/~samrolof, contains his continually updated blog, photos of sold and available paintings, a display of his numerous series, and another opportunity to contact him and provide feedback.