It’s not every day a painting tells the story of a 24-year friendship, thousands of miles of highway traveled, and an intimate aesthetic exchange—all while commenting on topical issues ripped from the day’s headlines.  But that’s what the paintings do in “Two Artists Collaborate,” my new exhibition with Shawn Webber at White Space Gallery in Portland.  I’d like to invite you attend the show and consider running a review and/or feature story about our unique collaboration.

While some people know me from my appearances on my brother’s hit reality show, “Little People, Big World,” on TLC, art lovers in Portland and beyond know me as a prolific painter with a penchant for social commentary.  My friend and collaborator Shawn Webber is a respected Bay Area-based painter and member of the trail-blazing art collective, The Oyster Pirates.  Together we traded 13 paintings back and forth over the course of a year in a collaborative project blending our individual styles together in unexpected ways.  The finished works are sexy, subversive, and just a little bit sinister.

Please see below and attached the press release for the exhibition, which runs October 6, 2016 through November 30, 2016, at White Space Gallery, 1439 NW Marshall Street, Portland, OR.  Shawn and I are both available for interviews, Q&A, human-interest features, podcasts, etc.

An exhibition of paintings by Sam Roloff and Shawn Webber

Opening reception at the gallery with the artists in attendance on First Thursday, October 6, 2016

Topical, deeply personal, highly symbolic, yet never inaccessible, the paintings have a history stretching back nearly a quarter-century. Roloff and Webber met in 1992 when they were students at San Francisco Art Institute.  They became friends and kept in touch throughout the ensuing decades.  While they had never worked together until a year ago, the two are no strangers to collaboration—Roloff having been involved in collaborative projects in Prague, Czech Republic, and Webber as a longtime member of The Oyster Pirates, a San Francisco art collective known for collaborative paintings and workshops.

The thirteen oil paintings in the current exhibition began a year ago with a one-painting experiment.  The exchange proved so stimulating artistically that the artists decided to keep the momentum going.  Spontaneity and experimentation are at the heart of the process.  As Webber notes, “The rules are:  There are no rules.”  The collaboration has influenced the individual styles of each artist—in subject matter, color palette, even technique.  “My painting style tends to be fast, high-energy, very expressionistic.  But since working with Shawn, I’ve been using some smaller brushes and painting with more detail.”  Individual works by Roloff and Webber will be displayed in the exhibition alongside the collaborative paintings to illustrate both the purity of each artist’s vision and the influences of their aesthetic cross-pollination.  “A lot of the process,” Webber adds, “is losing your ego:  giving up your ego to the other artist.”  Adding to the visual mélange is subtle detail work the men invited another artist, Joe Lichnovsky, to contribute to the melting pot of styles.

References to pop culture abound, among them the Google blimp, Elvis Presley in his iconic outfit from the film “Jailhouse Rock,” and BB-8, the lovable droid in “Star Wars:  The Force Awakens.” Art-historical references also make cameos: Jeff Koons’ Balloon Dog,
Banksy’s Floating Balloon Girl, a “Companion” figure by Kaws, and Caspar David Friedrich’s Wanderer above the Sea of Fog. In the long lineage of self-portraiture, Roloff makes an appearance in one painting, dapperly attired in a black suit and tie.  Both men include coded references to themselves in the form of animal life:  Webber as an elephant running free in the wild and Roloff as an elephant bound to a life in the circus—a reference to the crutches Roloff relies upon to get around.  The paintings also depict the signs, literally, of their journeys from germination to completion:  road signs from Interstate 5 and California Highway 1, which the artists traversed while hauling the paintings back and forth between Portland and San Francisco. 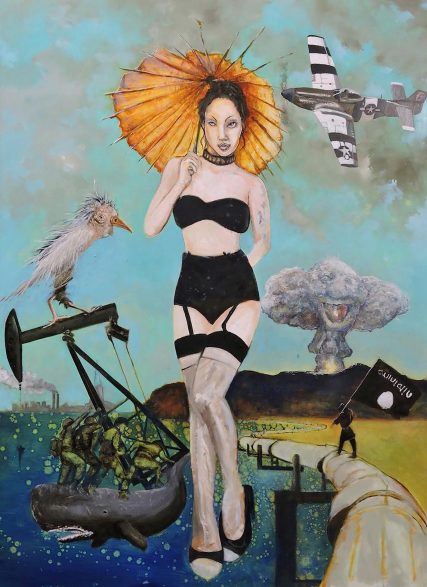 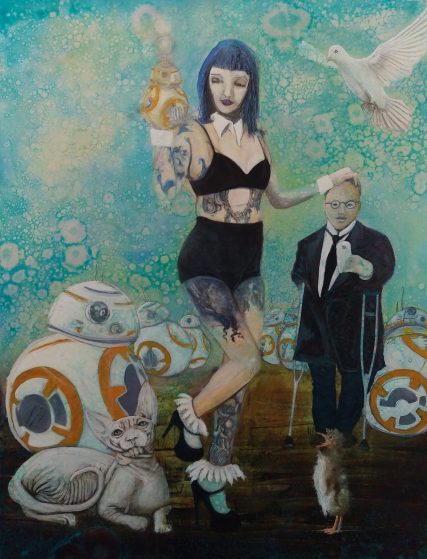 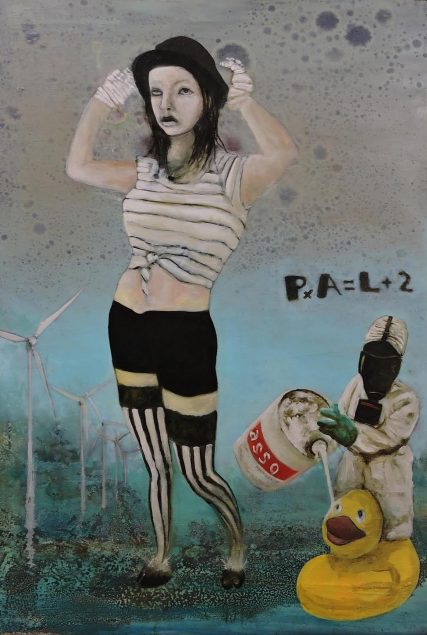 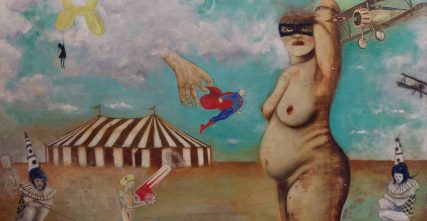 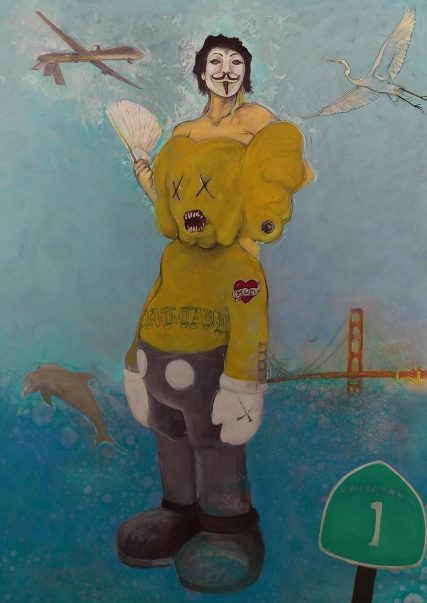 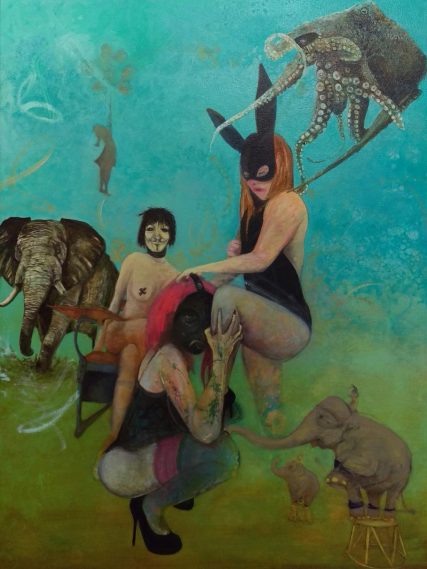 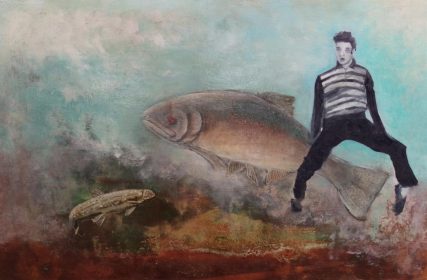 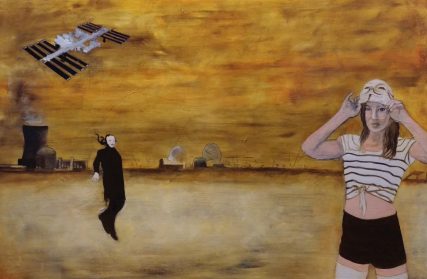 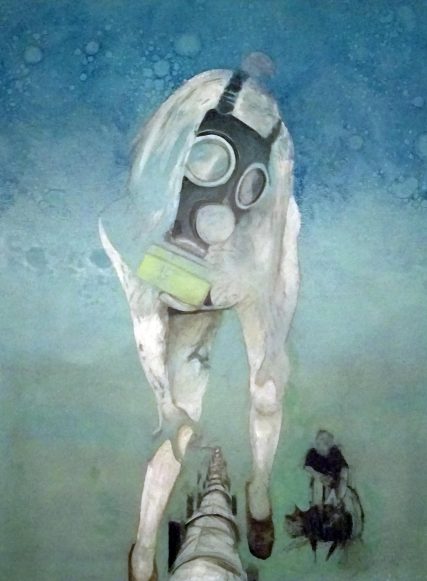 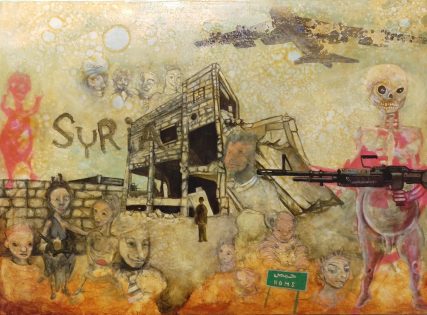 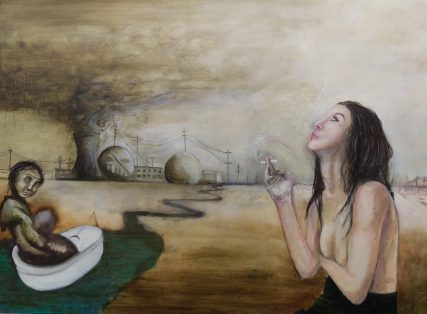 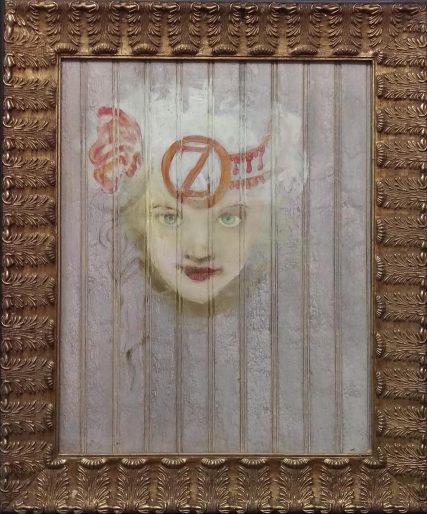 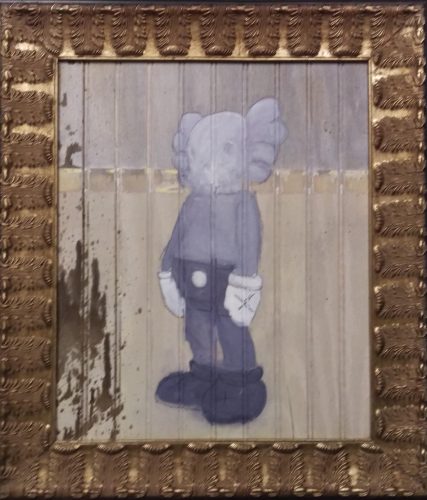 Solo paintings by Shawn Webber  – Before and After Collaboration 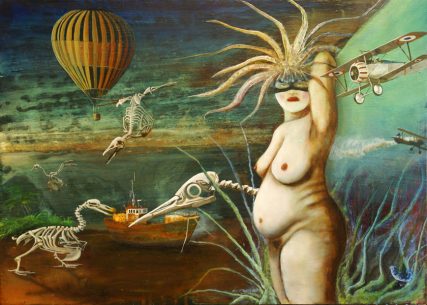 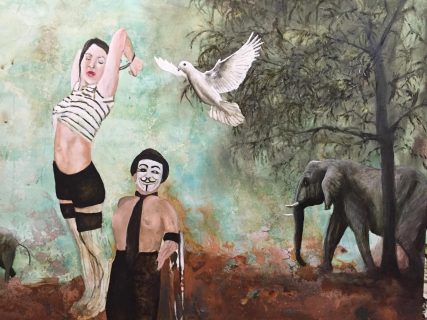 Solo paintings by Sam Roloff  – Before and After Collaboration 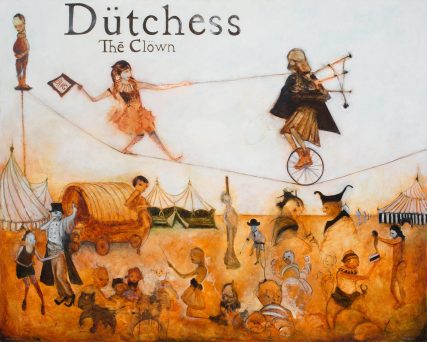 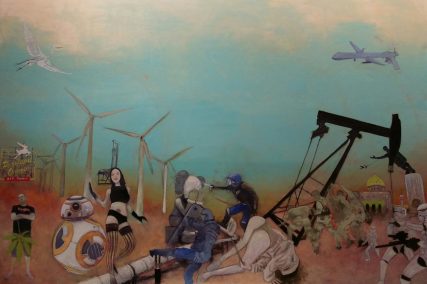